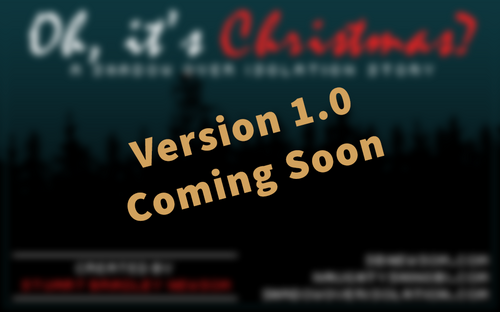 First and foremost, just wanted to also announce that I just opened up a personal Itch.io for future personal and itchio game jam projects. If you like this game, consider giving me a follow to keep current with what else i'm working on.

It's been what, 5+ years since I released this little mini-game to Itch.io. So many streams, messages, compliments, criticisms. It wasn't until January 1st 2020, when it was brought to my attention that Markiplier played my game, when I realized I wanted to do a bit more for the game before I put it to rest. Was he scared? Confused? Most definitely the latter.

The lot of you seemed to have enjoyed it and I've been mauling over whether or not I should give it want last look over. Shadow Over Isolation has been the most ambitious project I've worked on. Hell, 100x more ambitious with the fact that I'm doing it all solo...but it's a passion project. Something I don't want to skimp on or half ass. Hell, as disastrous as 2020 was, I have been the most active and satisfied with the work i've put into it.

Its now 2021, and I know it's well over a month past christmas. (I know, missed opportunity, but life has been hectic). So now, i'm announcing, the final version of Oh, It's Christmas will be releasing at the end of Q1 2021.

Some of the more notable additions to this final version...

Have a good one everyone!

Get Oh, It's Christmas

Are we not in August though?